As another sneak preview of his new album, enjoy Rev. Branch's heartfelt interpretation of the Lou Reed composition "Jesus," originally recorded by the Velvet Underground in 1967. This stirring rendition appears on Rev. Branch's LP, I've Got Heaven on My Mind, now available on CD and download.

Rev. Branch frequently asks for song recommendations, and the Velvet Underground's "Jesus" was a composition I thought might speak to him. Though Rev. Branch is 84, he's never followed rock or popular music, and the Velvet Underground (and the song's composer, the late Lou Reed) were new to him. Still, he recognized a familiar dynamic at work in the song—and in his covering the track. As he explains in the liner notes of the new CD:

"With this song, rock and roll took the message from the Christian family, and made rock and roll out of it. But when I was a little boy on Bayou Black, we got our radio broadcasts from Tennessee—Nashville. (In those days, we didn't have much radio in Louisiana.) We took what they called hillbilly songs and changed 'em around our way, made them spiritual songs. We put 'em together.

"It seemed to me that's what I was praying when I was 3 or 4 years old: Help me in my weakness...and right down the line."

The album was recorded and mixed by Todd Burke (Fitz and the Tantrums, Ben Harper) and was produced by Wyatt Doyle of New Texture and Yeti's Mike McGonigal.

Join Rev. Branch for a live performance to celebrate the release of the CD at the Heavenly Rainbow this Sunday, July 26 at 3:30 pm. For more details and to RSVP, visit the event page on Facebook. Copies of the CD will be available for purchase at the event.

Out-of-towners can order copies of the CD here: bit.ly/RevBCD

Watch "Rest," also from I've Got Heaven on My Mind, here. 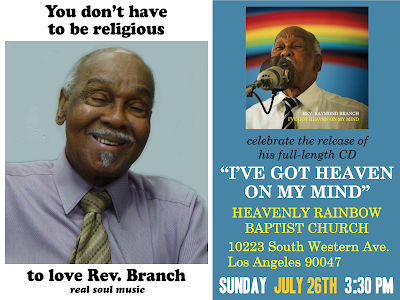 I'VE GOT HEAVEN ON MY MIND is the first full-length release from Rev. Raymond Branch. Recorded live in the Heavenly Rainbow Baptist Church by Todd Burke, the album features 12 contemplative tracks, including Rev. Branch's new interpretation of the Velvet Underground's "Jesus," composed by Lou Reed. I'VE GOT HEAVEN ON MY MIND is Rev. Branch as you've never heard him before; click HERE to pick up your copy on CD or HERE for download now.
For over 40 years, New Orleans native Reverend Raymond Branch shared his home and church recordings each week on Los Angeles' Rainbow Gospel Hour. Emanating from Inglewood's KTYM, the diminished late night signal and the program's pre-dawn scheduling, followed by KTYM's subsequent removal of musical programs from its streaming service, made hearing Rev. Branch's broadcasts almost impossible for most listeners. Our hope was that this site would go some way toward rectifying that.
In 2014, Rev. Branch retired the historic broadcast upon learning KTYM would be changing ownership and format. Archival tapes of Rev. Branch's shows will continue to be posted here.